Arabic Folktales: The Legend of Ali Baba and the Forty Thieves 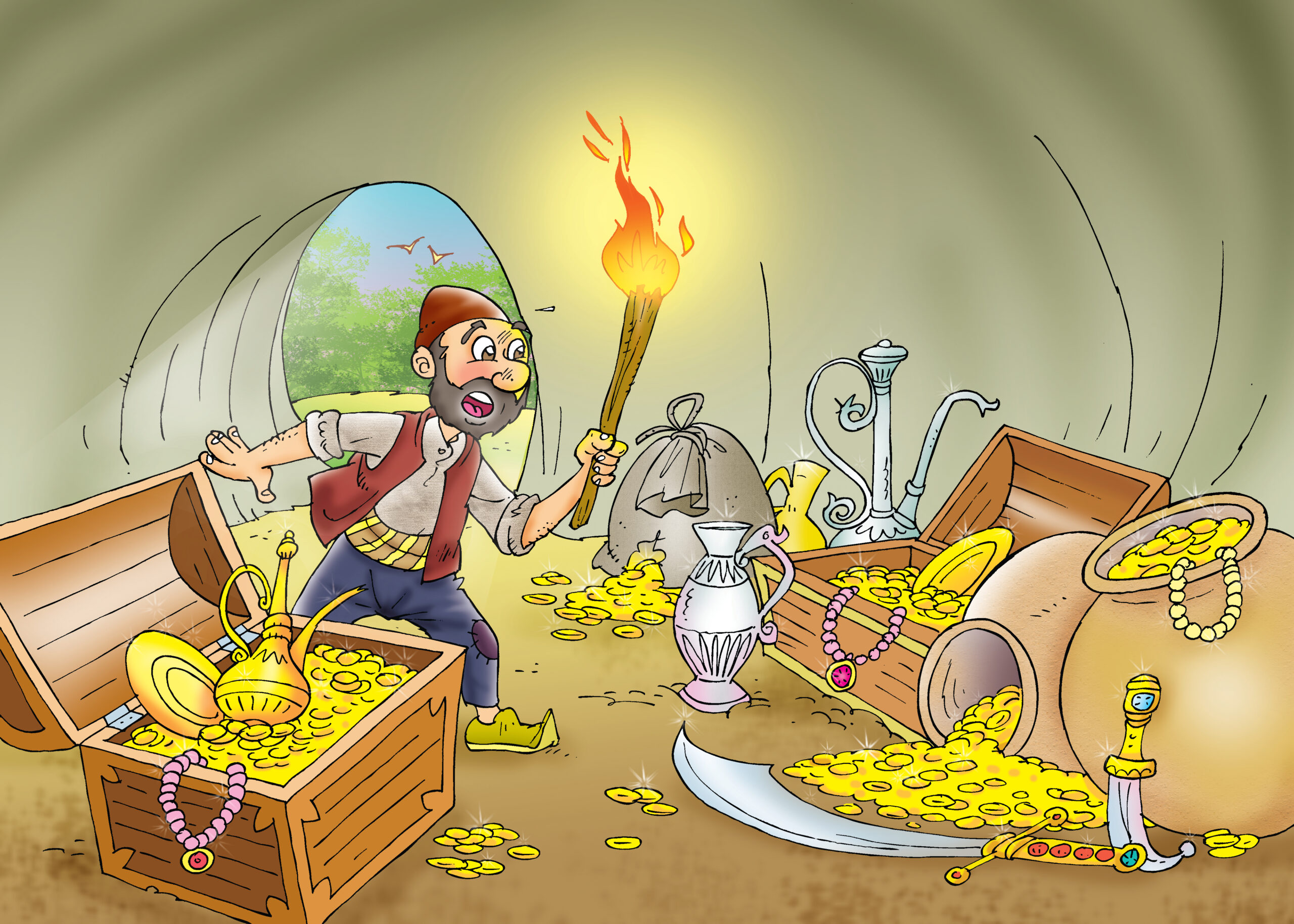 Arabic Folktales: The Legend of Ali Baba and the Forty Thieves

The legend of Ali Baba and the Forty Thieves is a folk tale in Arab culture from a compilation of folktales called One Thousand and One nights. It is one of the Arabic stories that is famous around the world and is known in Middle East culture.

In 1001 nights, this is one of the best known stories. The story is centered on a fictional character named Ali Baba who is a poor woodcutter. Ali Baba has a brother, Kassim, who married rich and lives in luxury. However, Ali Baba married poor and has to maintain his family through woodcutting. One day, Ali Baba discovers a thieves den which opens at the verbal command of ‘open sesame’ or ‘iftah ya simsim’ in Arabic.

Ali Baba discovers this after he sees 40 thieves saying ‘open sesame’ and ‘shut sesame’ to rocks that would open a door for them. Ali Baba then steals the riches in the cave and lives a good life. However, Kassim finds out that his brother is so rich that he measures his treasure rather than counts it. This makes him curious as he thought his brother is poor.

After Kassim confronts his brother, Ali Baba tells him where he got his treasure from and how to get it. Kassim goes to the cave and says ‘open sesame!’ He finds so much treasure and starts putting them in bags. When Kassim wanted to leave, he forgot the secret words. He started naming different types of grain but could not remember the correct one. Eventually the thieves came and saw him. Kassim tries to run away from them but gets killed and cut up into 4 parts.

What Did They Do?

The thieves hang his body in front of the cave to warn anyone who tries to come in. Kassims wife gets worried and asks Ali Baba to look for him. When Ali Baba goes to the cave, he finds his brother cut into pieces. Ali Baba takes his brothers body home secretly. With the help of Kassims smart slave, sews up his brother’s body to make it seem like a natural death.

It Doesn’t End There

When the thieves return to the cave, they find the body disappeared. They understand that someone else is aware of their secret cave and so have to kill them as well. One of their men is sent to the city to try find out who they killed and who knows. The thief that was sent to the city eventually finds out that about Kassim and his brother, Ali Baba.

The 40 thieves then suspect Ali Baba so they hide themselves in large oil jars in Ali Baba’s courtyard. However, when one of the slaves of Ali Baba, Morgiana, goes to extract oil from the jars, she hears the thieves.

She understands that these thieves are there to kill Ali Baba and so she pours hot oil in each jar which kills them. Ali Baba, grateful to Morgiana, marries her to his son as she has helped him twice.

Want more of these articles? Well, luckily we have plenty of specialized articles just for you. Not only that, but we offer have the one and only Kaleela app. Through Kaleela, you will have everything you need and want to learn Arabic in the RIGHT way. Click here to check out our courses.